see more Fadi Arouri: Ramallah
Palestinians take part in a rally in solidarity with the Palestinian prisoner Mahmoud Sarsak in the West Bank city of Ramallah, on June 11, 2012. Sarsak, who is a former player of the Palestinian national team, has entered his 88th hunger strike day against his administrative detention without a charge in Israeli prison.

Over 20 students from the ‘We Are All Hana Shalabi’ campaign in Scotland joined Palestinian activists today in a protest against the complicity of the British government in Israel’s apartheid regime. The demonstration was held specifically to highlight the cases of Palestinian hunger strikers Mahmoud Sarsak (84 days) , Akram Al-Rehwai (60 days) and Samer Al-Barq (23 days). Palestinian national footballer Sarsak and Rekhawi are in a ‘very severe’ condition according to Anat Litvin from Physicians for Human Rights (PHR) Israel and in danger of imminent death.

The protest began at the International Red Cross building in Sheikh Jarrah, before the activists marched to the nearby British Consulate, chanting for the freedom of Palestinian prisoners in Arabic and English. Among those protesting was Atallah Hanna, the Archbishop of Sebastia from the Orthodox Patriachate of Jerusalem. The activists held banners reading “Free Sarsak, Free Palestine” and “Boycott G4S – Boycott Israel”… 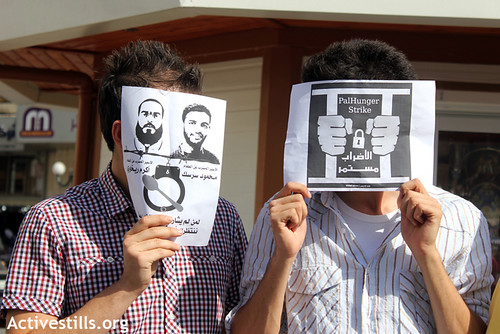 Palestinian prisoners round up: compiled twits

PSP committee member Ahmed Abu Hashem to be remanded without bail until the end of his court proceedings. #BeitUmmar #palestine #prisoners

An Appeal to save the life of Mahmoud Sarsak

Our brother and son, Mahmoud Sarsak, is a 25 years old professional footballer from Rafah refugee camp in the Gaza Strip, today entering his 67th day of hunger strike. We ask you to support Mahmoud and his demand for fair treatment. Your voice can contribute to saving his life and to a little victory against injustice.

Mahmoud has been imprisoned by Israel for the past three years, after being arrested by the Israeli military on 22nd July 2009 at the Erez checkpoint in Gaza while on his way to join the Palestine National Football team for a match in Balata refugee camp in the West Bank.

After his arrest he was transferred to Ashkelon prison where he was interrogated for 30 days, before being given a detention order on 23rd August 2009…

Muhammad Taj and Mahmoud Sarsak are still on hunger strike

According to Addameer, Muhammad Taj is now hunger striking again. He re-launched his strike May 15, since the Israeli prison authorities rejected his demand to be treated as a POW. Prior to that, he was on a hunger strike for 58 days. As a response, the al-Jalameh prison authorities placed him in solitary confinement and he was beaten yesterday to pressure him to end his hunger strike.

As for Sarsak, Addameer reported that the Israeli authorities have gone back on a deal they had made with him to be released July 1, and are now saying he will not be released before August 22.  He has been on a hunger strike for 60 days now.

Breaking: clashes between protesters in solidarity with political prisoners and the IOF near Ofer prison

The IOF attacked locals demonstrating in solidarity with the hunger striking political prisoners at the entrance to Bani Na’im east of Hebron. During these clashes 16 years old ‘Ali Iyad Yassin was injured from a gas canister to his chest and taken to a hospital in Hebron for treatment. Another teen, Daud Nihad Taraira (17) was arrested by the soldiers at the scene.

EMERGENCY UPDATE: Representatives of the International Red Cross have just informed the families of Thaer Halahleh and Bilal Diab, the Palestinian prisoners held in administrative detention who have been on hunger strike for over 70 days, that their lives are now at serious risk. Thaer and Bilal are have been repeatedly losing consciousness for the last several hours. They are currently receiving care at the Ramle Hospital. The occupation authorities are not even allowing their family members to visit them.

Press release – Joining the struggle: the organizations from Jaffa refuse to keep silent and let political prisoners starve to death in Israeli prisons.

On Saturday, May the 12th, at 15.30 o’clock on Clock Tower square in Jaffa an Arab-Jewish protest rally will take place. A general call has gone out to all the city’s residents to join the hunger strike for one day, in solidarity. Jaffa’s residents will join the struggle of the Palestinian prisoners. During the latest meeting of the Jaffa organizations it has been decided that Jaffa needs to stand up in solidarity with the striking prisoners and express complete identification with their just demands. Some of the activities that will be undertaken:

The organization of an Arab Jewish protest rally on Saturday May the 12th at 15.30 o’clock on Clock Tower square in Jaffa.

An outcry to all residents to join the hunger strike for one day, this Saturday, in solidarity with the hunger-strikers

A continuation of the daily protests on Clock Tower Square at 18.00 o’clock in order to raise consciousness concerning the struggle

4.653 Palestinian prisoners are held captive In various prisons in Israel, amongst
them 219 minors, in addition to 308 prisoners held in administrative detention
without charges, proof of guilt and without even knowing what they are being
accused of nor the ability to defend themselves in due process.

Almost 2000 prisoners have been on hunger strike for several weeks in protest
against their imprisonment as well the fact they are being denied the most basic
conditions. About 10 of the hunger-strikers have done so for over 45 days and their lives are in imminent danger. Eight of these 10 hunger strikers are administrative detainees.

The administrative detainees Hassan Safdie and Omar Abu Shalal have been on a
hunger-strike for 67 days and Bilal Diab and Taher Halahla have been on hunger
strike for 73 days already and their medical condition deteriorates from day to
day. The Supreme Court has refused the request to be released and has thereby
condemned them to death.

The Forum of Organizations in Jaffa:

intifadamedia
Create a free website or blog at WordPress.com.